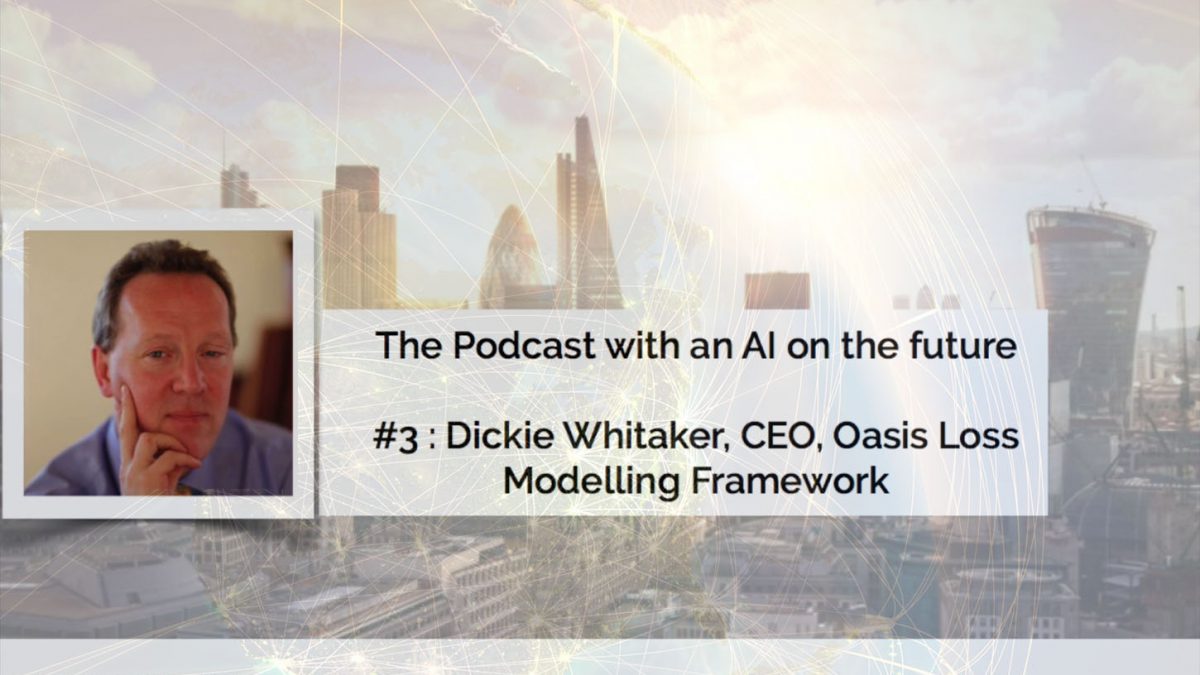 Premonition podcast talks to Dickie Whitaker, an expert on risk and innovation within the (re)insurance market.

Dickie Whitaker has 30 year’s experience in the Re(In)surance business and for the last 20 years has specialized in risk and innovation and linking academia, government, and finance.  He has worked and talked around the world on topics relating to insurance innovation.  He is currently the CEO of Oasis Loss Modelling Framework based in London and we caught up with him on the Premonition Podcast to talk about the impact of big data and innovation on the insurance industry.

The conversation in full;

Dickie Whitaker: Well good morning, and glad to be here.

AW: We’re looking at the impact of big data and Insure tech on the market. Tell me this, insurance has been transacted in the same way for a very long time, and the insurance industry and innovation have not always been natural bedfellows. I sense it’s changing, quite dramatically, but is that a fair assessment of the past?

DW: In essence, it is, yes. I mean there are pockets of times in history when, at least parts of the world you know, have shown quite a bit of innovation. But as a general rule, at least going back through recent history, the answer to that is it’s been a traditional business and one that’s heavily regulated and that regulation tends to have a drag on innovation. But I think that’s changing and what we’ve been seeing in the last few years is a drive for innovation that’s coming from some fundamental attacks on the ultimate business models of insurance. It’s coming from a prevalence of what these days we call Insure Tech, which is sort of our version of Fintech.  What that’s doing is it’s making people think that we’ve got to think differently about big data and machine learning and the sort of AI. The sort of things we’re seeing in other sectors are beginning to worry people in the insurance industry, and they think the answer is innovation and they’re trying to work out how to do it. So it’s exciting times for those reasons.

AW: I’m very interested from the premonition perspective on where you see big data playing a role?

DW: It’s yet uncertain how it’s going to completely play out, but there are some things we can see.  You’ve got things like telematics as the obvious example. Where being able to put a bit of kit in the car and being able to monitor on a regular basis the driving habits of, at least initially young people. What that’s doing is providing an enormous amount of data from which insurers can say, “What are we going to do with this? How are we going to use it? What information does it give us on risk?” And that’s very much changing the sort of way people are looking at things.

I think though that’s just the tip of the iceberg.

I know another organization, for example, that’s looking at training and behavior and how behavior is changing what’s going on.

And all of those things are coming together on a number of different new platforms. I can think of two new data management platforms that are offering services around how can we begin to bring all this data together and make some sense of it. There is a lag though, I think the insurance industry is still working out how to consume this information, how to mix this information, how to bring it into the sort of key functions of sort of risk selection and pricing. But it’s happening, and it’s happening fast. My guess is the pace will accelerate.

AW: I want to come back at the end of this to your views on where the major changes will come. But one thought I’ve always had is that insurance has traditionally been focused on how we lived, rather than how we live. Do you think that big data and risk assessment can bring it into the present?

DW: Absolutely. Not only does it need to happen, but it’s beginning to happen too. So you’re absolutely right. Historically insurance risk analysis, and for that matter, customer analysis has always been looking in the rearview mirror. You take historical activity, historical losses, historical customer statistics. Now not only can we say, “Well, what do people want now, today? And what is their performance today? And what is their risk profile today?”, but we can actually look into the future as well.

So there are considerable debates going on, the obvious one perhaps is climate change, where we’re beginning to use some of the data that’s emerging, to look in the future. So it’s the people, their trends, and activities, that’s where we’re going to see the biggest change coming forward.

AW: The insurers or the Insure tech companies that are coming into the market, will become ever more niche, using data to drill down into the habits of particular niche areas within insurance.

DW: I think that’s true.   I’m not a big fan of huge companies coming in and saying, “We’re going to be all things to all men.” I never really believe that, but it had some logic when you had an IBM type of footprint to survive.

Today I think the opposite is true, so you need to be light, you need to be focused, you need to be agile. Those are the characteristics that make sense and those are the ones that allow innovation to thrive. We’ve got a little bit of a bottle jam, because I think whilst that is true on the one hand, we still need better technology systems to be able to distribute this and I think that’s probably one of the biggest areas of weakness, where we’re not seeing enough platforms allowing interoperability of data and tools into the insurance industry. So I think that’s our biggest gap right now.

AW: With the insular world that we live here at Premonition with legal data, and as we begin to penetrate the insurance market … now that legal data is available in the way that it is with the likes of Premonition, how do you think this can help the industry?

DW: When I first saw that data set I was just sort of amazed that somebody had been able to get all that data together.  Pretty quickly after that, I started thinking about the opportunities that it could help create. I would say there are two things. The first one is, one of the bigger challenges that we face in the insurance industry, is trend identification. So it’s where’s the next big thing is going to happen?  One of the obvious abilities that you can do with your data is able to say, “Well, actually there looks like there’s increasing litigation in this area, this type of business. Or alternatively, perhaps, we’re seeing awards change dramatically in this State, or in this part of the UK, or in this profession.” That type of trend analysis is really the bread and butter of the insurance industry. That’s essentially how you understand, how you select risks, how you price risks, how you develop the right amount of sovereignty capital. So that to me is, that’s the golden egg that I am sure people are going to take hold of.

AW: How do you see the before and after in terms of the market and big data? But you know, the way that people dealt with risk assessment before something like Premonition came along and after, it should dramatically change the way they assess the risk.

DW: Some of this data historically has been available but in many cases, it’s been available only to the largest companies who’ve got the longest track record in the business. So actually it’s sort of perpetuating some of the big beasts in the marketplace and what it really means is that light, new, agile companies can come along and go, “I don’t have to have 20 years track record of underwriting in the UK, or Australia, or the US. I can get that information from this database.”

And as you say, there’s an additional element, which I think frankly is in the infancy of utilization by the insurance industry at least, of saying, “We are more likely to be able to direct …” It’s almost like a sort of loss adjuster function.

If a house sort of burns down or has got a problem, one can start saying, “Well, actually don’t you think, if you’re going to get this judge or this expert witness …” That we’re increasingly able to say what the prognosis will be of the size of the award or success of the award, and therefore take action before that happens to reduce costs or to make a better decision as a result. And that’s never been able to be done before.

AW: I’m going to close this podcast fairly shortly but just give me a view on a couple of final questions. Is open data a key element in success and fairness in the market?

DW: Open data to me is extremely important for a couple of reasons. The sort of foundation for a company that I started, is all about the openness of data. Because I it does a couple of things. One, you can take a fairly moral and ethical view here and just say that actually society needs to have access to the information, that’s what’s is efficient for society, and that’s what allows people to build products and get transparency and get fairness and equity. So for all those reasons, it makes sense.

AW: Final question.  There’s much talk about the convergence of incumbents and Insure tech and where that might or might not lead. Have you got a view of when the major changes will happen in the next five, 10 years?

DW: If you look at typical cases around the world where you get some sort of innovation driver against a well-established industry, you tend to get a sort of common pattern. The common pattern is the slow-moving companies just can’t move quick enough, and therefore some of them fall by the wayside. Others can move quick enough and actually do what’s needed to be done.  Then you get new players that were never there before, that come onto the scene, that end up by driving their sort of business models in that space. So I think we’ll inevitably see some of all of the above in a mix that will be slightly unique because every market is unique. But we’ll see significant disruption, significant new players. We’ll evolve, and we’ll all be better off. 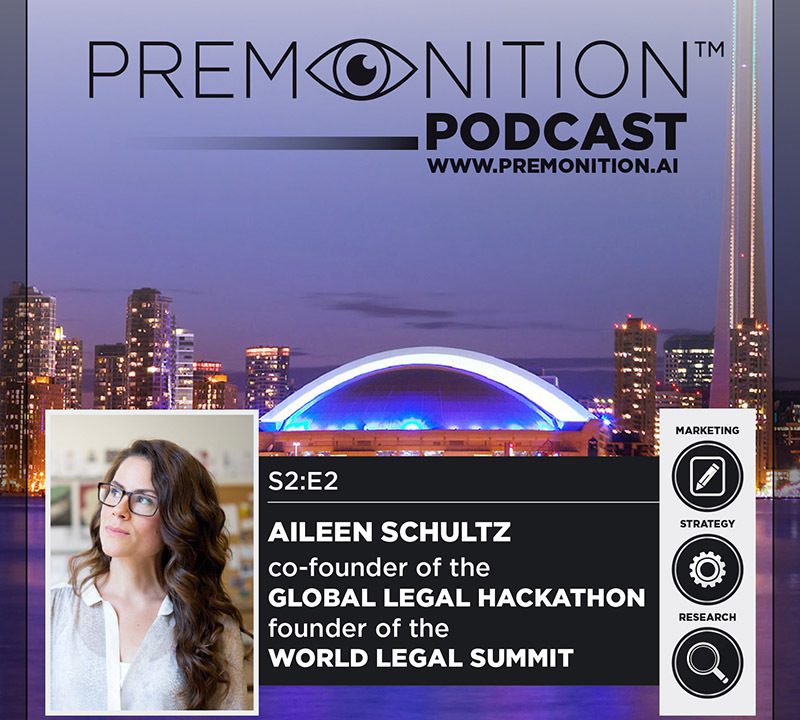 Premonition Podcast With Aileen A. Schultz 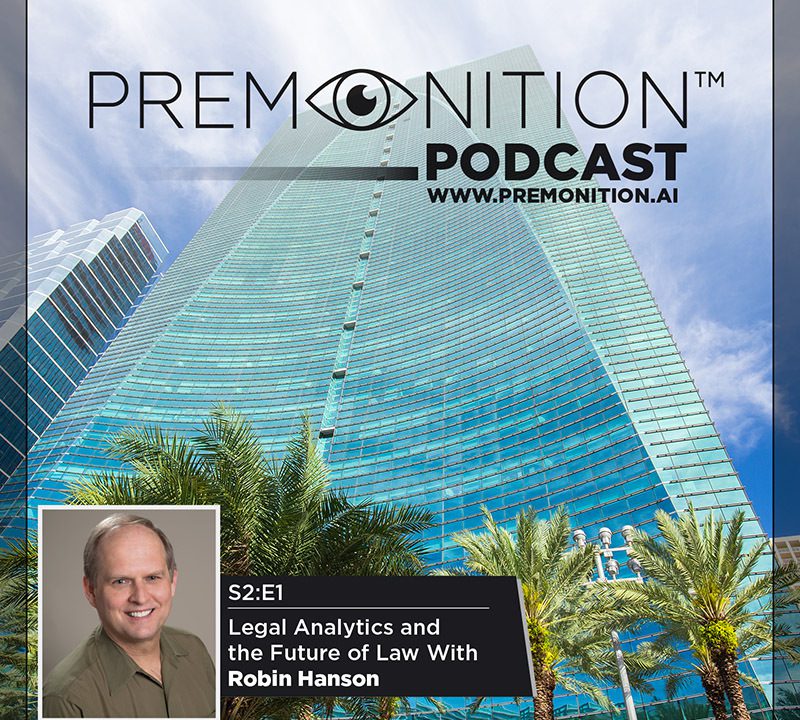 The Premonition Podcast with Robin Hanson and Ian Collins 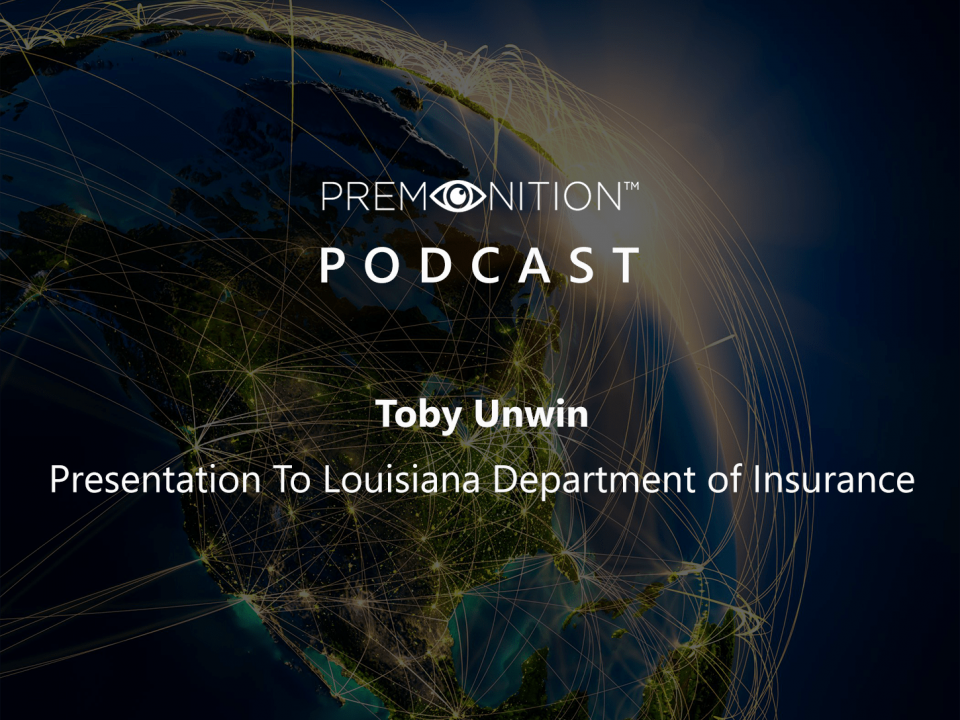