A chat with Ty Sagalow, CIO at Premonition, Co-Founder of Lemonade

A chat with Ty Sagalow, CIO at Premonition, Co-Founder of Lemonade 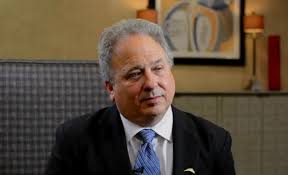 Ty Sagalow is a 35 year insurance industry veteran and one of the co-founders of Lemonade, he is also now the senior advisor and CIO at Premonition so, with that much experience joining our team, we had to get him onto our podcast to explain more about the past, present and very exciting future within the insurance space.

You can listen to the podcast here.

But for those who still prefer the written word, here’s an edited version of the conversation;

Andrew Weaver: Ty, welcome, thank you for joining us on this podcast.

Ty Sagalow: Oh, thank you for asking me, Andrew.

Andrew Weaver: It’s a great pleasure. I’m intrigued and interested. You’re described as an insurance veteran. But I think your work in insurtech means it’s more appropriate to call you a spring chicken.

Andrew Weaver: You worked for significant insurance incumbents before you joined startups with Lemonade, and we’ll come on perhaps to Premonition as well later. What made you decide, what was the decision process for you to leave that traditional model behind and go with startups?

Andrew Weaver: As part of my research for this podcast, I heard a story you told that related to the Urban Dictionary and the perception of the insurance market. It’s interesting how people perceive the insurance market, and perhaps that’s a fundamental part of the problems it’s encountering at the moment.

Eventually working with some really, really, really smarter people, we figured out that the reason for that was that there’s something fundamentally broken about the current modern insurance model, whereby there is a conflict of interest inherent in the model between the claims department of an insurance company and the policyholders, where for every dollar that is not paid in a claim, that is another dollar of profit for the insurance company. So the insurance company and their client are in direct conflict. It’s hard to think of another industry that has survived where the industry and their client are inherently in conflict based upon the business model of how that industry works.

Andrew Weaver: So here you are with an industry that’s fundamentally flawed in many ways. You’ve had a 33 year career. What took you to Lemonade? How did you find that project?

Ty Sagalow: Well, actually, Lemonade found me, which was really cool. So I was, you know, you can imagine, I’m a consultant, I’m in my office, I get phone calls on a regular basis from entrepreneurs that want to do something fascinating and they need an insurance product but the insurance product that they need doesn’t exist. Eventually they come to me and I create something new. So it was on a day like any other where I got a phone call from an entrepreneur. He had a nice British accent like you, so a little bit different than most folks that would call me in New York, and he wanted to meet me to talk to me about this new idea. So I met him, of course, and he only knew three things at the time, he wanted to create a company called Lemonade, it would have something to do with the insurance industry, and it would some way be able to give back to the community. His name is Daniel Schreiber, one of the most brilliant people I know, a great executive, and eventually learned something about insurance, but that first meeting he knew nothing about insurance.

So he and his co-founder Shai Wininger, who’s the CEO of Fiverr and probably one of the world’s greatest technologists and software coders, we started with the name on the wall, Lemonade, and then after three days we brainstormed what type of insurance company it could be. They were kind enough to ask me afterwards to stick around and be the chief insurance officer of Lemonade and the CEO of Lemonade Insurance Company. It was a tremendous adventure. Lemonade quickly become the leader in the insurtech space. But again, if the space is only two years old, you can do that sort of thing.

Andrew Weaver: Well, phenomenal growth. So your time with Lemonade ended in July of this year?

Ty Sagalow: Correct. So in July 1st of this year I transitioned off of Lemonade, having done the job I was hired by Daniel and Shai. With underwriting claims, finance, we had our domestic licence in New York, licenced in over 22 States, representing 60% of the company. They asked me to stay on the board, so I’m still on the board. But then I went back to consulting to look for my next adventure.

Andrew Weaver: Which landed where? Premonition I think is the name of the company?

Ty Sagalow: Yeah, Premonition is the name of the company. I am so excited about my affiliation with Premonition. When I went out after Lemonade and I was sort of looking for the next Lemonade, and what I mean by that is I was looking for the next company that would severely disrupt the insurance industry. You know, the co-founders of Premonition found me in much of the way that Daniel and Shai found me. They began talking to me about an area of insurance, which had long bothered me, which was the lack of scientific method in managing and choosing outside counsel. The company had been around for four years, but they had not thought of it as a potential solution to insurance. Then after discussions with me we all concluded that there was a lot there and they asked me to stick around as an advisor and as the chief insurance officer to help talk to the insurance industry about the Premonition business model and how it could be helpful to them.

Ty Sagalow: No, actually, not on a conscious level. Andrew, you’re 100% right. I mean, up until five minutes ago I had not thought about it. But you’re absolutely right. I think one of the drivers toward Premonition is the fact that it shares a couple of fundamental characteristics with Lemonade. It is a company based upon artificial intelligence and algorithms and it also is fundamentally based on transparency. So as Lemonade actually has transparent chronicles that tell insureds everything that’s going on within the company and of course within their insurance, in many ways Premonition takes you to a step further and shines light on an area where there was no light, which is, how do you manage your outside counsel, how do you manage even panel counsel in many ways? What are the KPIs? What is the data behind those KPIs? And how can you lower your, not just expense ratio, but more importantly loss ratio, in addition to what I realised later was a tremendous help that the Premonition business model, database and algorithm can do for the underwriting community.

Andrew Weaver: For the one or two listeners that don’t know what Premonition do or are, they have the world’s largest litigation database. 40,000 cases a day are scraped it’s an extraordinary machine. From that they’re able to extract very detailed analysis about the performance of judges and lawyers and courts, and the three of them combined.

Ty, who in the insurance industry do you think will find the premonition database and win rates useful?

Ty Sagalow: Well, your summary of Premonition is good. So it has two fundamental value propositions. One, it has the largest litigation database, 87% of all cases in the United States and in many other countries as well are in this database, which includes the judge, the plaintiff’s attorney, the defendant’s attorney, the venue, the duration of the case, where it is, and the type of case. Simply put, it has more data than all of the competitors combined, really phenomenal, and again, shows that true disruption can only occur from the outside.

So the first and obvious part is claims. But the more we started talking to carriers, the more we realised that the underwriting department can find this database plus algorithm to be as useful. A couple of obvious examples, right? So if you’re a lawyer’s professional liability underwriter, you underwrite the errors and omissions of attorneys. This type of database would be immediately helpful to you in knowing which attorneys are, all else being equal, good risks or bad risks. Simply knowing all the types of cases your insured has been involved in is critical. Because as any lawyer’s professional liability underwriter will tell you, lawyers get sued when they go out of their comfort zone. Taking cases outside of your expertise will not necessarily be disclosed in your insurance application. So you need access to a third party in order to get that information.

But it’s not just lawyers professional liability or attorney E&O underwriters, small company D&O underwriters, directors and officers liability insurance for small businesses is based upon the founders. So if the founders are being sued a lot, if they’re even being sued for things having nothing to do with their capacity as a director or officer of the company, if they’re being sued for divorce, for credit problems, if they’re involved in a criminal action, a DWI, all those things are relevant to the underwriting of small business directors and officers liability insurance, and yet D&O underwriters today have no access to that information.

Andrew Weaver: Let me wrap this up with a final question that I want you to look into that crystal ball of yours and tell me where you see insurtech taking us in the next 5 to 10 years.

Ty Sagalow: You know, my daughter asked me recently, “Daddy, what do they call Chinese food in China?” And I said, “Food.” I think the same thing’s going to happen with insurtech. In the years to come, insurtech will disappear. It will just be insurance. What today we think about as a technologically enhanced insurance industry will simply the insurance industry. I do believe that we will need to effectively deal with the inherent conflict of interest in the traditional insurance industry that is just not a way that an industry can thrive and survive. I believe wisdom of the crowd is going to replace professional centres of knowledge.

Andrew Weaver: I knew I was going to enjoy this conversation. I was very excited meeting you. You’ve absolutely delivered. Thank you so much for your input and your insight.

Ty Sagalow: Well, thank you very much, Andrew. I very enjoyed our conversation. Thank you so much for all your questions. I look forward to doing this again with you sometime in the future.

A chat with Ty Sagalow, CIO at Premonition, Co-Founder of Lemonade was last modified: July 20th, 2018 by Andrew Weaver
Share